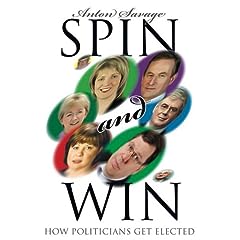 Seriously, don't judge this by its cover!

Anton Savage’s “Spin and Win” has an awful cover which does the book itself a terrible disservice. The well-known communications consultant has written a concise and very readable book about how Irish politicians get elected, and it is well worth a read.

What I found interesting about the book was the key points that rang true for me as a former political activist. Often, people who write books about Irish politics tend to take a cynical, theoretical view as opposed to a realistic one based on actual experience.

In particular, Savage points out that:

It has its weaknesses. He is very eager to reference every book he has read on the subject, but most of them, in fairness, are worth mentioning.

When I go to buy a book, I always skim through it in the shop, trying to see if I can imagine myself actually enjoying reading it. I flicked open at this paragraph, and this set, very much, the tone of the book for me, where he sums up the unique selling points of Irish political parties as people really see them:

Fianna Fail:  We’ll do whatever will keep you happiest.

Finally, just buy it for the story as to why Garrett Fitzgerald had a disco ball hanging from the ceiling of his study. The answer is simplicity itself.