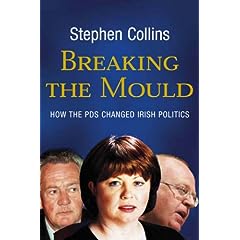 For a former PD like myself, reading Stephen Collins’s “Breaking the Mould” is a bit of a journey through a misspent youth, as I can recall many of the events in it.

Collins does a good job of painting the huge air of expectation that surrounded the founding of the party, and the belief that it could turn the Irish political system on its head.

I’d recommend, in particular, that PD haters read the book, as it paints a very accurate portrayal of a) how unideological the party actually was, and b) how the so-called “right wing” agenda was never more than a figment of some fevered left and right wing headbangers. Given the ugly right wing voices beginning to appear on the political horizon, they may look back nostalgically on the PDs.

What is most revealing about the party’s story is that after Haughey’s departure from public life the party absolutely struggled to define, even internally, what it was actually for, and how the party, from the Dail to us, the members, pretty much lost our nerve. That’s what killed the Progressive Democrats in the end.