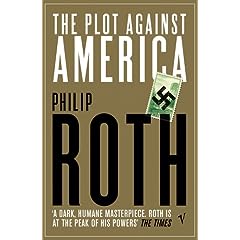 Philip Roth’s The Plot Against America is most disturbing in it’s subtlety. Partly autobiographical, in that much of it is based on Roth’s experience of casual anti semitism growing up in New Jersey in the 1940s, it is essentially an alternate history novel.

What if All American Hero, Isolationist and effective anti semite Charles Lindbergh had defeated President Roosevelt in 1940?

It’s not a Nazi Germany by the Potomac story, but more about how an extremist idea can creep incrementally into the mainstream, gaining acceptance amongst people who would normally have opposed such a thing, even co-opting Jews into the project under the guise of anything for a quiet life.

The ending has been criticised, and it does read as if Roth suddenly frightened himself with how far he had progressed in making evil ideas seem banal.