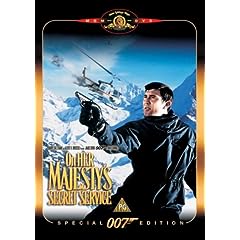 The Much Maligned Mr. Lazenby

George Lazenby played 007 only once, and for a while it became fashionable amongst bond afficionados to dismiss OHMSS as a kind of embarrassing uncle of the series, best not spoken about.

Yet the movie, and Lazenby, are both entertaining, and I feel both are  contenders for inclusion at least in the top two Bonds and Movies, especially when one considers the direction the movies took with Roger Moore.

Lazenby is particularly solid in the fight scenes, dare I say it even more rugged than Connery, and yet portrays a certain rare (Rare for James Bond, anyway) vulnerability, in that you feel he actually loves Tracey, played by Diana Rigg.

In short, Lazenby portrayed Bond as someone you would actually like as a person.

Keep an eye out for a young Joanna Lumley.