When I first read about Google’s new product, Google Glass, the Human Resources manager in me thought “Holy crap!”

See, I didn’t see a pair of glasses with access to the web or the ability to take pictures or video. I saw a total surveillance system recording daily interactions in the workplace. Just think for a moment about the effect such a system would have in sexual harassment cases, or teacher discipline, or allegations of police brutality.

Picture the husband about to beat his wife as she looks at him through her glasses. Even a barked threat to her to take them off becomes a recorded piece of evidence of the truth in a situation, especially if the glasses are uploading the images and therefore destroying the glasses does not eliminate the recording.

Consider the scenario five years from now, when the technology is widespread, and Google and their competitors have partnered with fashionable glass manufacturers and shrunk the technology even further, when you no longer know whether the person you are talking to is actually wearing Google Glass. Yes, companies will have protocols about people having their glasses “on” but the reality will be that someone summoned to meet the head of HR or their boss will want to record it.

Indeed, given that people have a right to a witness for meeting like this, I would have thought a judge would endorse the right to have your glasses operational at meetings of that nature. Now, it’s true, people could be recording these meeting on their smart phones now, but even that’s not the same. Knowing that what you are saying to a criminal suspect or a student or an employee could be uploaded as a piece of footage within minutes of you saying it will radically change behaviour, or destroy those who don’t change theirs.

In short, this has the potential to be a massive social game-changer.

I’ve recently purchased a new Remington beard trimmer, and am mighty impressed. Being a facial hair aficionado, I tend to get asked many a query. “Jason,” They ask, “You who has such a fine crop of chin hair, should I consider it too?” Usually, the query is not as much about a beard as about the possibility of a moustache, and it is here that I choose to reveal to my female readers ( And yes, amazingly I do actually have them.) one of the great secrets of late 20th Century Man:

Tom Selleck’s moustache. There. I’ve said it. The fact is, when a man thinks of growing a moustache, he thinks he will look like Tom Selleck in Magnum P.I.
Here’s the sad thing. We never do, because Tom Selleck is a fine looking man whose moustache added to his charm, whilst most of us are just fat blokes with a ronnie. It is, my friends, one of the sad facts of the universe.

Incidentally, I am also asked as to the beard’s effect on “the ladies.” Yes, I’m not joking, that was the phrase used, and in that certain tone too. In my experience, the answer is this: the great majority of women hate beards. You have been warned, gentlemen.

By the way, if you are new to beards, a couple of pointers. You’ll need a little scissors for trimming hair to stop it hanging over your top lip. Also, you’ll buy a trimmer with great gusto and then become very nervous about using it because you’ll be afraid of accidentally shaving a chunk of your new appendage off. Fret not. Just set the trimmer to the highest setting (longest hair length) and give it a whirl. You’ll find by gradually working down the settings (get a trimmer with plenty of choices. Mine has nine.) you’ll find the depth of trim you want. But a warning: DO NOT GET OVER CONFIDENT. Remember, you can’t reverse a shave. When you reach the length you’re happy with, resist the urge to fiddle by notching down another setting. And occasionally, get it done professionally: it looks and feels great, and you’ll get tips watching the barber. Just remember to tell him how much you actually want off.

As to ideal lengths, it’s a matter of taste. I like a tight beard. Another chap I know, in a very stuffy profession, likes a Charles Stewart Parnell. All a matter of taste. Same with the finish around the neck. Some like a natural let-it-grow finish, others a “marked” trim, that is, a neat line.

I recently stumbled across this edit from “The West Wing” of the relationship between Bartlet and Leo. It’s a fictional relationship brought to life by Sorkin’s  superb writing and the remarkable performances of Sheen and Spencer (probably the most important relationship in the whole show), and I defy you not to shed a tear at the portrayal of two men who obviously love each other very much.

It’s one of the few downsides of our modern (and correct) tolerance for homosexuality that we struggle to see strong male relationships in a non-sexual light. Doris Kearns Goodwin in “Team of Rivals” makes this point about Lincoln’s friendships and the fact that many of his letters and his gushing emotional expression towards his male friends seem almost gay in a modern context.

Of course, it is changing, with the phrase “bromance” leading the charge, but as a male friend recently pointed out to me whilst we had lunch together, the women at the table behind us were actively speculating as to our relationship, and whether I was his gay sugar daddy or not. 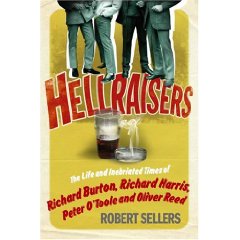 Hellraisers is one of those books you read in a single holiday because it is a) quite short, and b) just so chock full of laugh out loud stories that you fly through them looking to get to the next one.

The subject is Burton, O’Toole, Reed and Harris, back when men were men who went roarin’ shoutin’ and fightin’ and then delivered their lines perfectly on set.

Whether it was Harris demanding tea and toast in a police station or Reed announcing to crowded pubs that one of his friends had a bigger cock than he did (When he wasn’t shooting at helicopters with his shotgun.) an absolute joy to read. 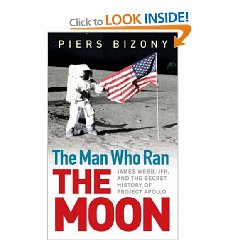 I would like to think of myself as a relatively mild mannered man. Having said that, there is almost nothing that makes me want to sail over a table, fists flying, as when I hear someone casually announce that ” Of course they didn’t go to the moon. It was all a film set!”

Piers Bizony (What a great name!) sets out in his book The Man Who Ran The Moon the story of James Webb, an old style Democratic hack who was appointed to head NASA, and pretty much singlehandedly turned US policy towards landing a man on the moon. With a mix of noble belief (Webb believed that all problems, including poverty, could be solved by NASA style mission controls) and good ole fashioned political wheel greasing (Wonder why mission control is in Houston? Because the congressman in charge of NASA’s budget represented the district!) Webb took 5% of the national budget and employed 500,000 people on the moonshot.

Which, incidentally, is why I believe they did go to the moon. Because they had spent so much money and involved so many people it would have been impossible not to.

From the X Files spin off  “The Lone Gunmen”. 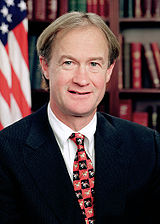 See this guy to the left? There are lesser spotted lesbian pottery making owls who are less rare than him. His name is Lincoln Chafee, and from 1999 to 2007 he was a Republican United States Senator from the great if teensy-weensy state of Rhode Island. Nothing special there, you say. Except he was against the death penalty. And the Iraq war. And in favour of gay rights. In fact, on many issues he was to the left of President Obama. In the 2004 general election he wrote George Bush senior’s name on the ballot as a write-in candidate. He endorsed Obama in 2008. Surely, you say, he’s really a Democrat. That’s certainly what the hard right in the Republican party say, calling him, and other moderate Republicans “RINOs” (Republicans in name only.) Yet Lincoln Chafee only quit the Republican party relatively recently, and is now the independent Governor of the state. Why? Because he believes in free enterprise, a small government, low taxes and the freedom of the individual. In other words, traditional Republican values, not the hate filled bible bashing whackjobbery that has seized control of what was once a pretty good party. It seems that there is no room in the modern Republican party  for moderates like Lincoln Chafee. Why is that? Here’s why:

Supposing Sinn Fein were able to draw up the boundaries of their own Dail constituencies, to ensure that all the Sinn Fein voters in a given area were in, and non-Sinn Fein voters were moved into another constituency. In other words, it was 100% assured that that constituency would  elect a Sinn Fein TD. What that would mean is that the real fight would not be the general election but for the Sinn Fein nomination. And supposing only Sinn Fein voters were allowed vote in the primary election. Imagine the sort of “I hate the Brits more than you!” grandstanding that would go on to appeal to that narrow electoral base, leading inevitably to candidates more concerned about appealing to the extreme voters in their primaries than the broad electorate because they are guaranteed to win in the general election. Sure, it’s not the same in Ireland, where our politicians are so broad based as to be meaningless, but in the US it is causing a poison at the heart of American politics. Both parties have gerrymandered districts so that most are either solid Democratic or Republican, and as a result the real fight is in the primaries, where candidates have to appeal to either ultra liberal or ultra conservative primary voters, and as a result you get a Congress with almost no middle ground.

That’s where we can help. Our electoral system, the single transferable vote, would transform US politics for the better, and here’s how:

First, it would allow parties to scrap the expensive primary process, instead permitting every candidate to contest the general election. In other words, there would be a number of Democrats and Republicans on the ballot paper. But rather than splitting the vote, STV would allow Republican voters to vote for their favoured candidate, but know that if he/she could not get elected, their votes would transfer to their second choice, and so on, until some candidate would win of 50% of all the votes in the district.

But that doesn’t matter in a rigged district, surely? That’s right, but that is where the second part of the Irish system helps. Multi-member districts, as we have in Ireland, make it much harder to gerrymander in favour of one party or another. A four or five seat district means that voters have a better choice, and a better representation for minorities (Such as white voters in parts of Los Angeles. Pay attention conservatives!). But it also allows American voters to vote for how they really feel. A Lincoln Chafee Republican may feel more comfortable giving a second preference to a Clinton Democrat than to a Rush Limbaugh Republican. Likewise, a Rush Limbaugh Republican may prefer to transfer to a Joe Lieberman Democrat than to a Lincoln Chaffee Republican. This system improves choice whilst rewarding moderation, and that’s surely what America needs now.