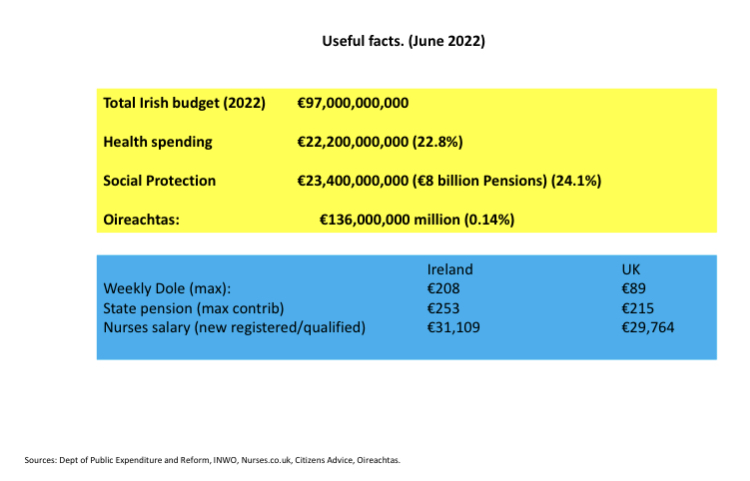 Last week I had to explain to a grown adult what happens if the government were to give every Irish adult a cash handout to combat rising prices. This was not an unintelligent person, just someone who had never had a reason to formally study economics. But it raised an issue with me: how can our political leaders provide leadership on inflation when possibly a majority of voters do not know what inflation is actually caused by. It’s true, economists are arguing over what is causing inflation from massive central bank printing of cash to Covid/Ukraine impact on supply chains. But one thing is certain: put €1000 cash into every Irish adults hand and price inflation will jump sharply as the extra cash pursues limited supply of product and services thus pushing up prices.
Inflation is just the latest public policy area where the level the public is informed about the issues affects the quality of the debate. I’ve met people who believe TDs pay no taxes and that 50% of the national budget is spent on Oireachtas salaries.

47% is spent just on social welfare and health.

A key component of a mature and healthy democracy is a well-informed electorate. It is as important to democratic stability as clean and fair elections. The new Electoral Commission should be tasked (and funded adequately for) with a rolling advertising campaign not only to ensure that voters know where to register and how to vote, and to analyse election results, but also with ensuring all voters are familiar with key non-partisan information they should know when deciding whom to vote for.

Who pays taxes and by how much? Who doesn’t?

How our homeless rates and social welfare payments compare with other comparable countries.

How many of our people live below the poverty line, and what the definition of poverty actually is.

As part of the process, there’s nothing to stop any political party asking that certain verified facts be included in the campaign, within context.

Indeed, parties should even have a right to publicly request that specific facts not be included.

There are some who will argue that such a task as this is the media’s job, not the state’s. I disagree, in the same way that I disagree with those who say only the private sector should be involved in education.

An educated population is the first line of defence against manipulation by evil forces, and as a result, it is certainly something our taxes should be spent on.